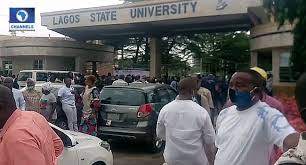 Pandemonium erupted early Monday morning at Lagos State University, Ojo Campus, as members of the Academic Personal Union of Universities (ASUU) and Non-Academic Personal Union of Universities (NASU) banned the institution’s vice-chancellor. Prof. Olanrewaju Fagboun and students do not have access to the premises. It was found that the action stemmed from protests by union members against the failure to pay pay increases promised by the Lagos State government after a year of promising.

It did so immediately after the resumption, as announced by Lagos State Governor Babajide Sanwo-Olu, that the state’s tertiary institutions would reopen on September 14, 2020. Students in 300 and 400 levels were due to resume on Monday along with other staff had been banned as a result of the devastation of the COVID-19 pandemic.

The problems began as early as 7 a.m. when union members took over the entrance to the university from security guards, preventing both human and vehicle movement from entering and leaving the premises. All requests by the Vice Chancellor to assert himself against the demonstrators were not heeded. Efforts to get a response from the Lagos government representative were still ongoing at the time of going to press.