Last month I mentioned that honeybees can sting – a comment that sparked some very sad comments and even some hate mail from honeybees. I want to clear up some misunderstandings about bee stings and some false identities.

First you have to understand that it is fatal for her if one of my sisters stings. That means, of course, that we’d rather not sting, and that honeybees are generally not aggressive. The main reason we would sting is to protect our beehive. If we feel our home is in danger, we will fight to protect it. However, when I’m foraging, gathering, and pollinating, the flowers interest me much more than any other person around. There’s no reason we can’t work together in the garden – I’ll pollinate and you can harvest!

There are several other species in the insect kingdom that look like me. Wasps and hoverflies are often mistaken for bees; They are only distantly related to me, however. Let me describe some of the distinguishing features.

Paper wasps and yellow jackets also dress in black and yellow. However, wasps look different from bees. They have smooth, sometimes shiny bodies and a very tightly pinched waist. They are bright yellow in color and fly with drooping legs. These wasps work together to build a nest, but they don’t raise their families as a cohesive unit. Wasps have random palates and will eat almost anything including other insects, spiders, carrion, trash, or your picnic lunch. Paper wasps and yellow jackets can sting multiple times and are much more aggressive than bees. I’d rather not be confused with these guys; we are not very alike.

Some other insects that have yellow and black stripes are carpenter bees, bumblebees, and hoverflies. I hang out with these guys a lot as they also feed on pollen and nectar. Like me, Carpenter Bees and Bumblebees have soft, flaky bodies and are muted golden yellow. Our waist is not as pronounced as a wasp’s and we pull our legs up when we fly. Hoverflies have smooth bodies and bright yellow stripes, but they are much smaller than wasps and also lack a defined waist. Like me, these other bees don’t really want to sting you. (Actually, hoverflies can’t sting at all, they just wear a wasp costume to scare you.) These guys are pretty good pollinators too, but maybe not as good as my sisters and me. 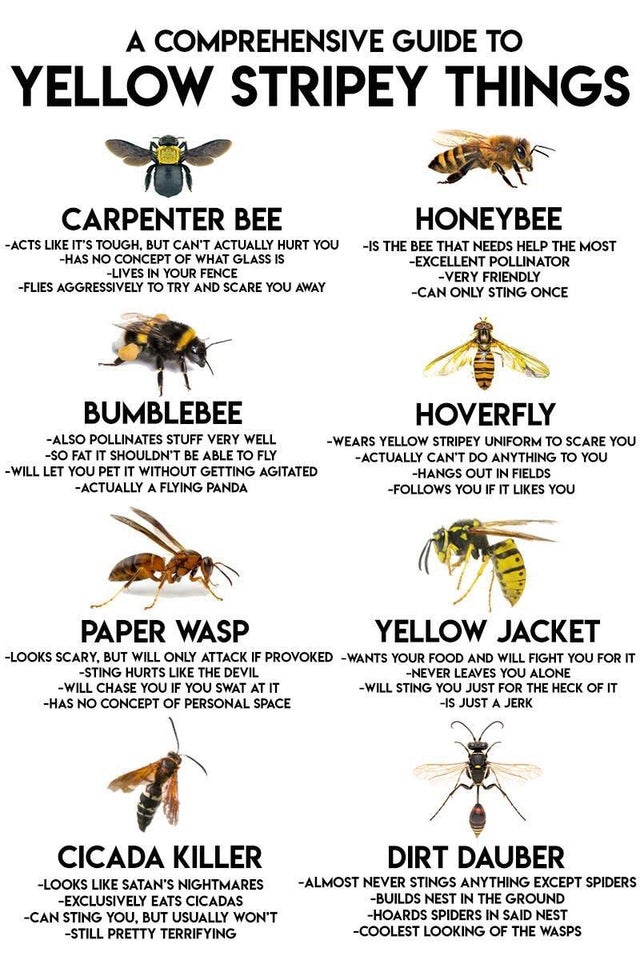 NOTE FROM STEPHANIE: If you get stung by a bee (and as a beekeeper I’ve been stung many times!), Here are some pointers.