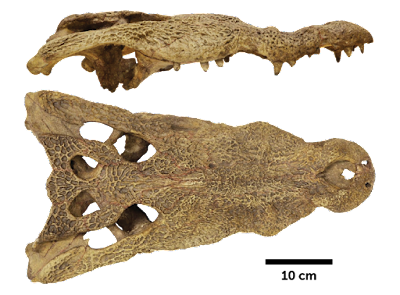 The 7 million year old skull from Crocodylus checchiai from As Sahabi, Libya

This C. checchiai The specimen is about 2 million years before the earliest known crocodile in America. Genetic studies show that the animal was also a close relative of the Nile crocodile.

According to Massimo Delfino, the extinct is Crocodylus checchiai “Fills a gap between the Nile crocodile in Africa and the four surviving American species.”

It is interesting that the oldest known American fossils from Crocodylus are older than the oldest known fossils from the Nilotic crocodile (C. niloticus). This fossil is older than both. Apparently these old animals swam between continents. “Not surprisingly,” said Delfino, “given today’s crocodiles’ ability to survive salt water and travel hundreds of kilometers when supported by ocean currents.”