How I stained our deck with Sherwin-Williams : TINY HOUSE

Is minimalism a trend for the rich? : TINY HOUSE

Tiny House Furniture – My search for the perfect futon on the ground floor : TINY HOUSE 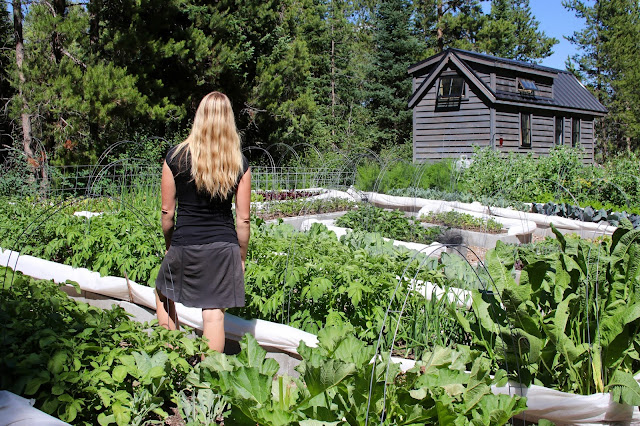 So far this year the garden has flourished overall. Which is wonderful because gardening is one of my favorite things to do. You eat wonderfully fresh food there. 😊 While the weather was pretty chilly for most of spring and early summer (up here in the mountains, around the freezing point), the frost covers continued to do their job well. I covered the garden probably 85% of the nights plus a few days from planting in early May to the end of the day

over the past week. When the weather finally stayed reliably warm at night in the 1940s. But for all that, things are thriving in this place, some better than any year before. Here’s a little glimpse of what’s growing now. 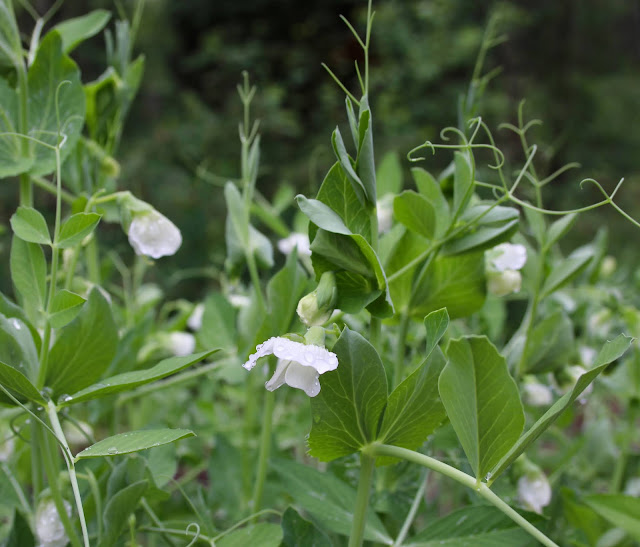 The peas look wonderful! After losing almost all of the peas two years in a row, I had to pocket the gophers first who ate each one before going to the gopher-safe beds, and then last year I believe aminopyralid residue (if you’re not familiar with it this nasty herbicide can get into your yard through hay it’s been applied to or through the manure from an animal that has eaten that hay, it doesn’t degrade in compost like most things and can stay in the soil and anything killing or making sick in the pea / bean and gourd / cucumber families for up to a decade.) From hay I mulched with years ago this is very exciting! I can only see a tiny bit of leaf margins on the peas resulting from the nutrient blockage that results from aminopyralid, but they are still getting almost as big as me, full of flowers and now lots of tiny peas that are about to ripen. The beans and pumpkins are still struggling to grow out and are the only things that really don’t thrive this year. Although they are better again than in previous years, 4 years after using the hay it needs to be gradually broken down and then all removed when I realized what had happened. Suffice it to say, this is not something you will ever want to get into your soil. 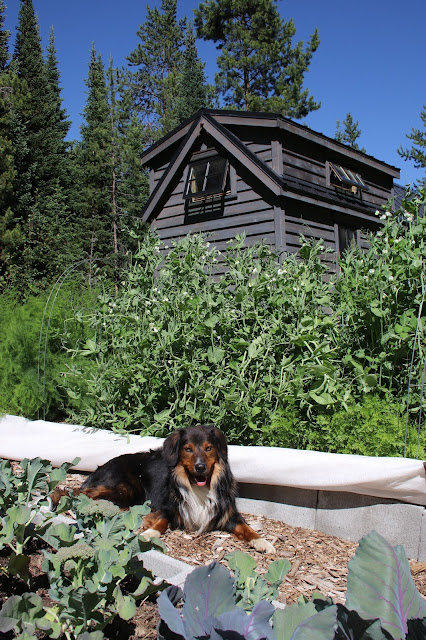 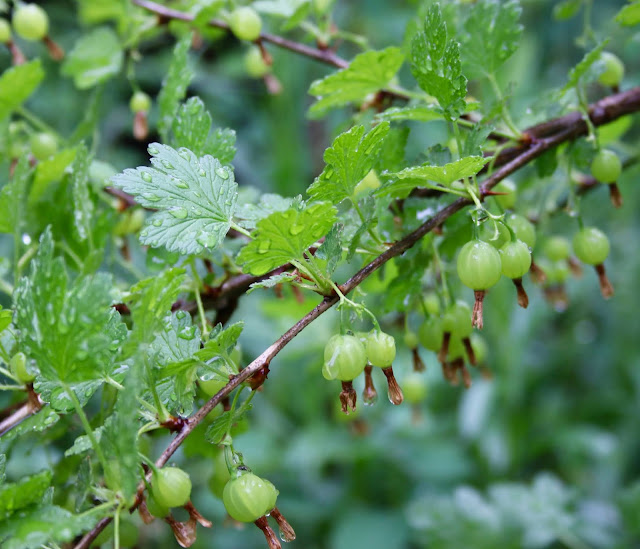 The gooseberry bush I planted as a little baby 5 years ago is now huge and full of berries that should soon ripen. 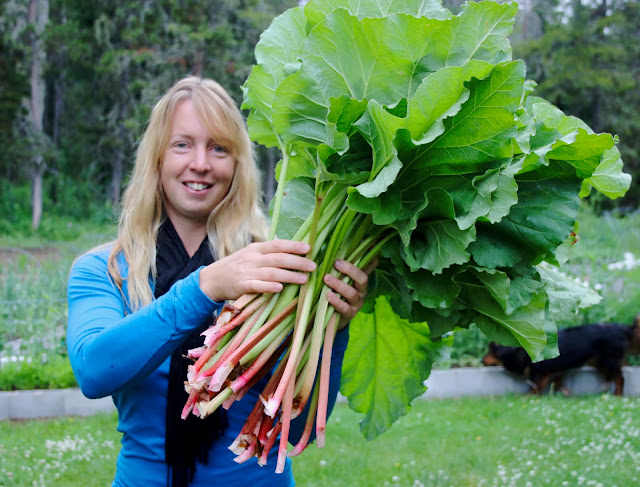 The rhubarb is huge too and I’ve already harvested quite a bit. Though it will soon be over for the year and will die back by next spring. 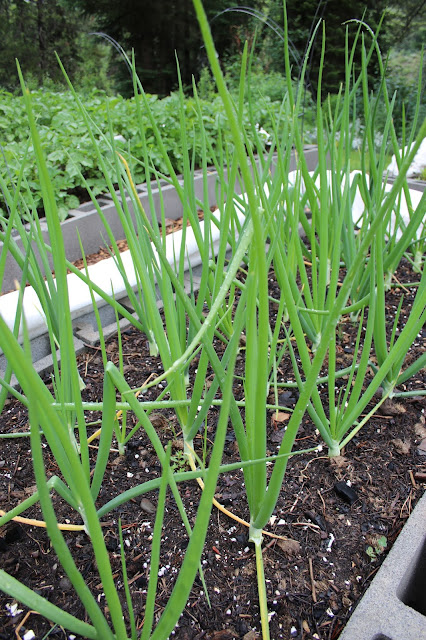 I have several pieces of onion in different garden beds and they all look healthy. I use onions so often in cooking that it’s almost impossible to have too many. 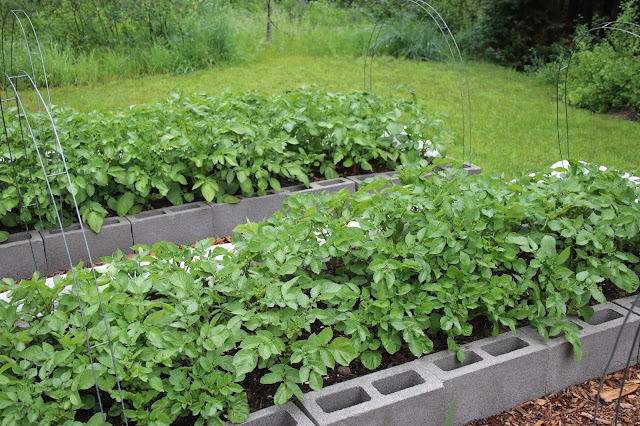 Both potato beds look wonderful, big, lush, so healthy and just starting to send out flowers. You’re one of the things I think looks better than any other year.

Some things like this, despite the very cool weather this year, make me wonder if the tiny amounts of some minerals I added to the soil after this soil test last fall really helped. Overall, the soil test showed a balanced soil with a lot of organic matter and most of the important minerals. Based on the recommendations, I added a few ounces each of zinc, copper, and boron to the entire garden. As well as a little powdered seaweed. I wonder if those things that were there when the plant’s cells needed them really helped make some things more alive than ever. 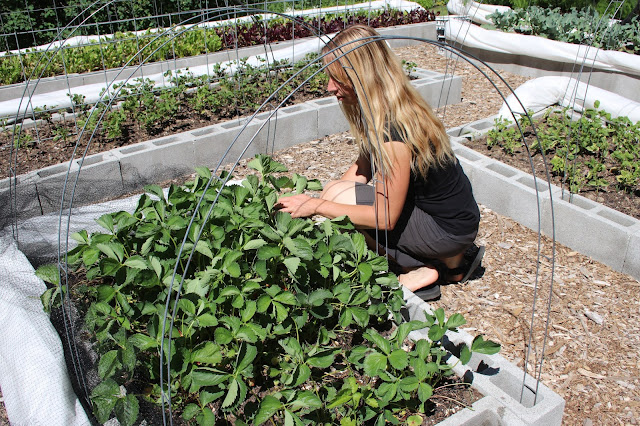 The strawberries are being harvested right now and I’ve picked a few handfuls so far with a lot more to ripen. 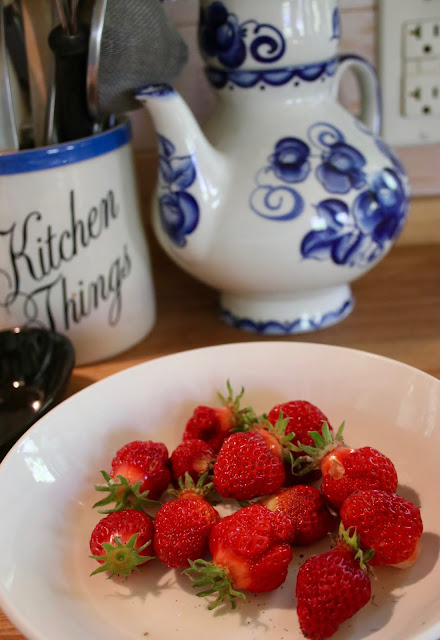 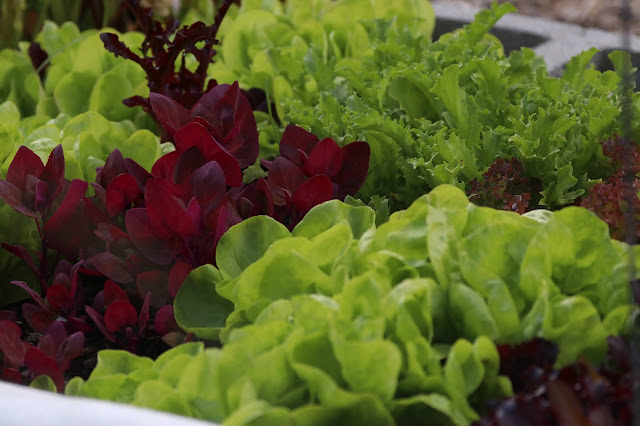 Lettuce, like most green leaves, love the cool climate here and thrive. I usually plant 8-12 varieties as I enjoy all of the colors together. I have enjoyed many salads of different types, lettuce in sandwiches etc and will continue to cut and come back with these little plants until they are buried under snow again. 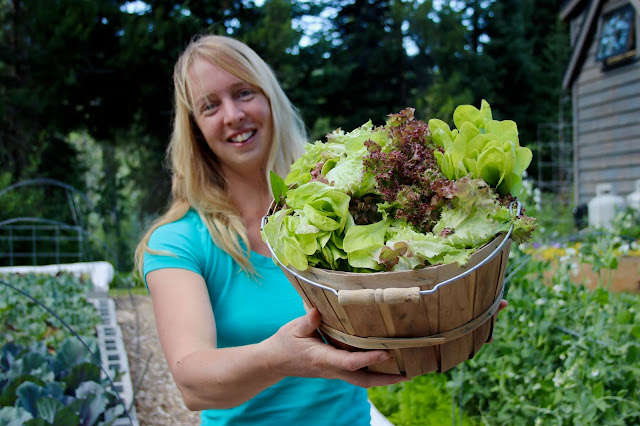 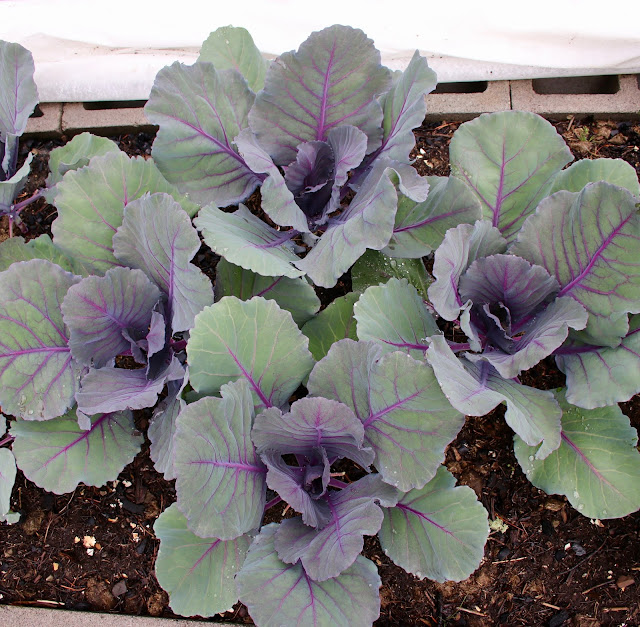 The cabbages, both purple and green, although it looks like I haven’t taken a picture of the greens, are growing well and are just beginning to form nice firm little heads in the centers. Cabbage is another thing that I can’t really have much of as I can always make more sauerkraut and Danish Christmas cabbage to enjoy in winter. 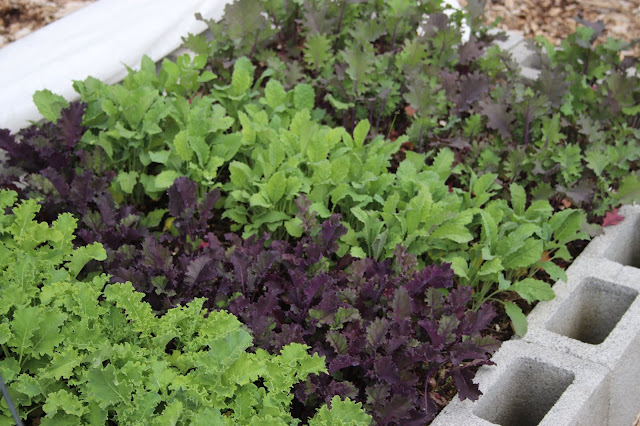 All four types of kale look pretty and are still young and tender and also work well as a complement to salads or as cooked greens. 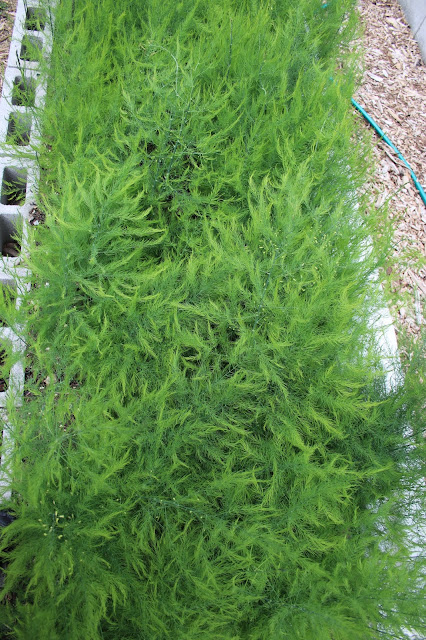 The harvest of asparagus shoots is over for the year, and on top the ripe stems look out. They are leafing with a beautiful fern-like texture and will now spend the rest of the summer feeding nutrients into the roots so they can grow even bigger and more productive next spring. I also think its fern-like texture is lovely and wonder why more people are not just planting them as an ornamental in flower beds, even if they don’t eat asparagus? The broccoli has had many beautiful heads and while I am harvesting the first batch of large central heads they will continue to produce many small side shoots for the rest of the summer. That makes a lot more delicious meals! 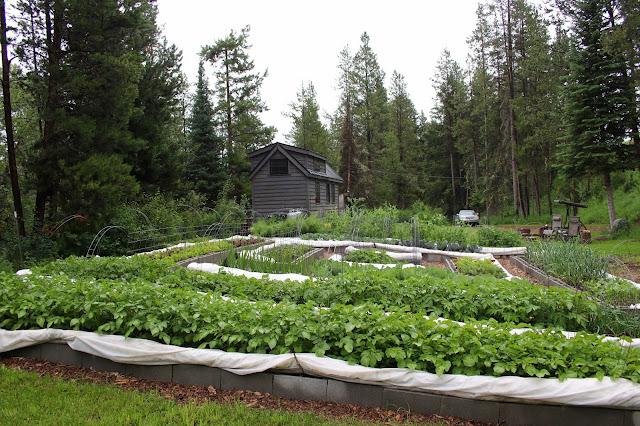 And there is a lot more. As you can see, the entire vegetable garden looks pretty green and happy overall. I really enjoy walking up and down the paths and watching everything in the garden. And it doesn’t take that much time and care either. After all the first work on the beds, which was completed last spring, I only planted all the seeds this year. Then water everything with the sprinklers every 4-5 days if it is not raining. And I weeded the beds once. It’s time to get out the little ones that I missed or that have sprouted since the first weed. But as you can probably see from most of the photos, I move most of the plants and plant items a little closer than I normally recommend. Partly because I know that in my cool area with very short summers, they don’t have much time to grow really big. And that also keeps the soil covered by growing plants, with almost no bare soil. That means it is almost impossible for weeds to get started as after the first weed in spring they can barely find space, light, water and nutrients to grow as the things I want to grow use all of these things. 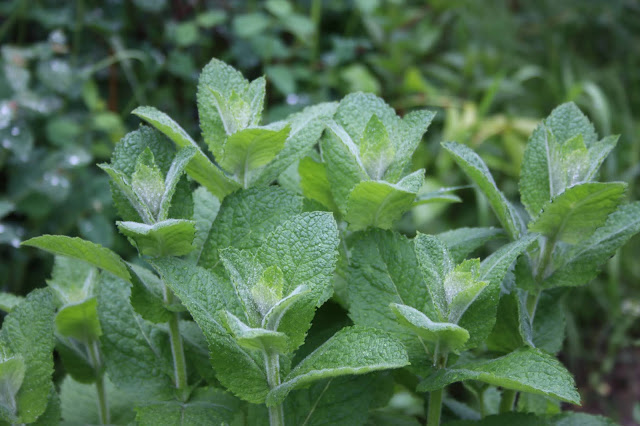 While there is only a little more than 600 square meters of bed space in the garden, many things grow on all the edges of the forest and of course on the planters around the house. Mint is one of the things I really enjoy and the top and bottom are two of the many plants in the mint family that fill in these edges as beautiful and tasty ground cover. This also saves me a lot of time, as the soil, which is covered with something growing, offers almost no space for the start, slows evaporation in our dry climate and makes a tasty product. Or beautiful flowers that are enjoyed by all bees, hummingbirds and butterflies. 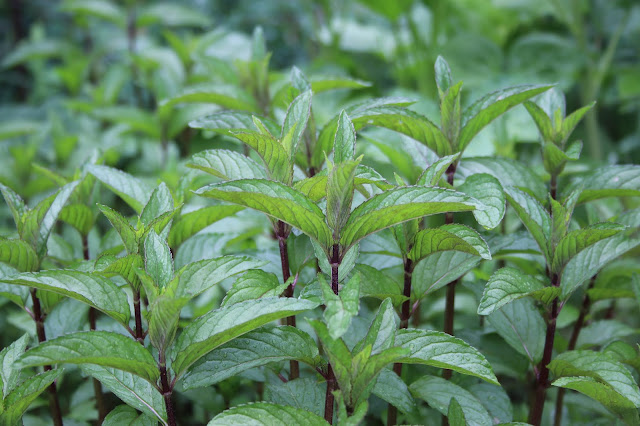 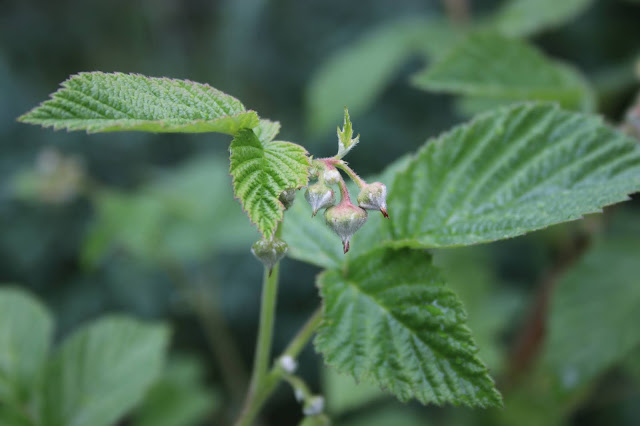 Raspberries are one of the things the mint leaves as a ground cover for. They are just forming small berries. 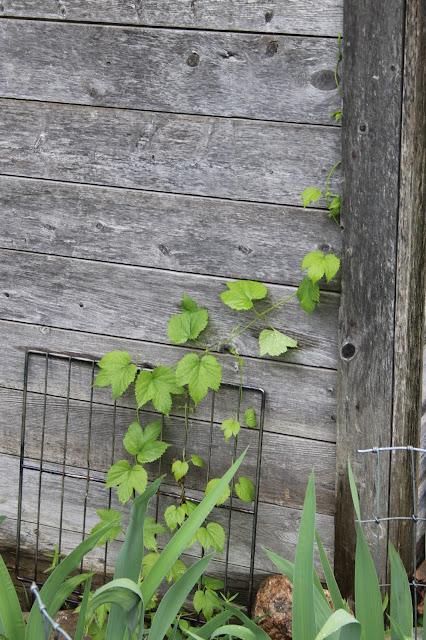 And then there are things like this little hop vine that a friend gave me when she had an extra little start next to hers. It’s crawling up a reused grating and since it outgrew it I just added a bigger one to the side of the little tool shed. 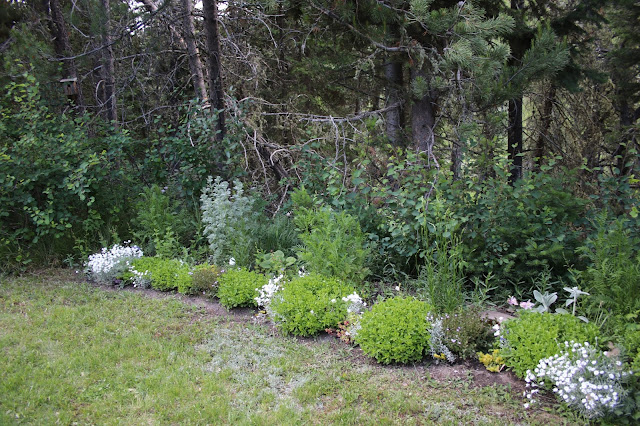 The entire edge of the wood / yard border is actually full of flowers and herbs. Too many to cover in this post, but a variety of things that I use herbal, medicinal, teas, a few edible foods, and lots of flowers for all of my little pollinators and gardening helpers. But that’s a glimpse of what’s happening in the garden these days. How do the things make you grow? I know many of you are at a very different stage of growth in warmer areas.

Final thoughts on the reclassification of Broadway & Birch Urban Planning

4 Helpful Strategies When You Get Stuck - Sarah K Peck Writing