Who doesn’t want to drive on these roads?

On my first trip to Bosnia and Herzegovina, three of us stacked up in a car, pointed to locations on the map and mostly drove surprisingly well-developed roads.

What we didn’t quite expect was how often we would stop the car to admire the natural beauty that is in Bosnia and Herzegovina. The lakes are a fascinating shade of blue and green, towering mountains collide with clouds and tiny villages, and bridges of all shapes and sizes connect roads that have as much to offer as the attractions themselves. Bosnia and Herzegovina is a real winner.

So many of the best moments of our trip were in tiny villages with confused locals, small cafes that greeted us like old friends, and many other places that I could never name or find on a map again. If you like to get lost and make new discoveries, then my friends, this is your next road trip destination!

Mostar is the typical picture-perfect image of Bosnia and Herzegovina, which adorns almost all of the country’s tourist advertising. Stari Most, the old bridge that is not so old after the conflict and has been reconstructed, attracts day-trippers from cruises and is the place where most people spend their short trips to the country.

Frankly, you don’t have to understand why when so much of the country has yet to be explored by the masses and the relatively affordable food, especially in Mostar New Town, makes this a fairly inexpensive city break. Away from the crowds on the bridge, where daring divers jump into the freezing water, this city has a really charming and peaceful way of life. 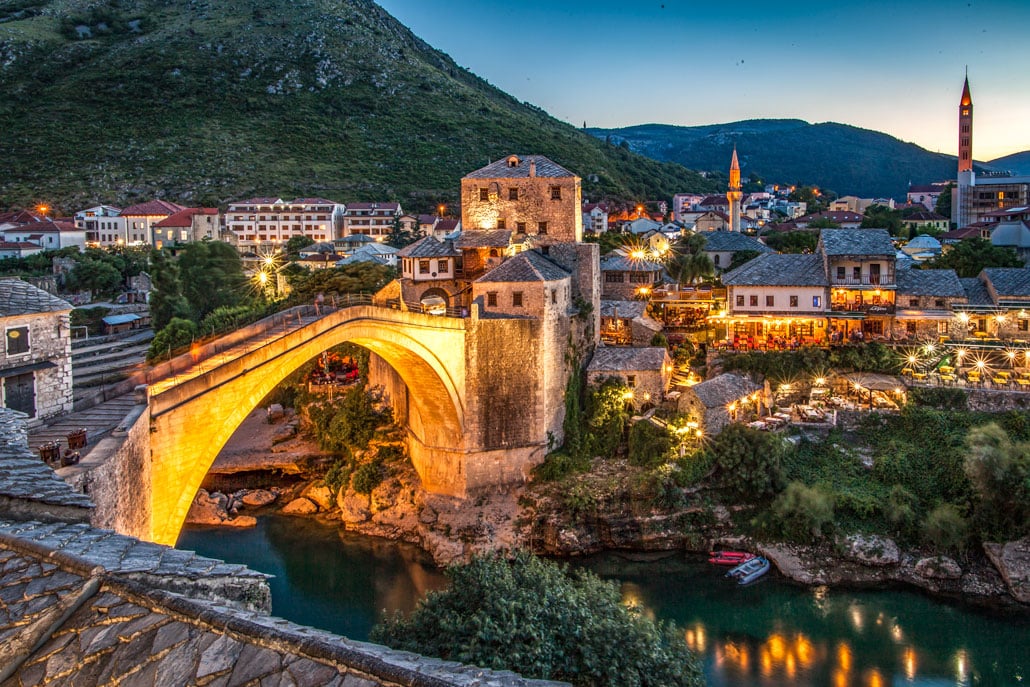 In the new part of Mostar, where only a few tourists are lost, countless restaurants that offer first-class food and surprisingly extensive cake menus are complemented by cool bars and café culture. Gigantic Yugoslav monuments stand in the middle of overgrown grass, old dilapidated banks have bullet holes and street art, and the locals go about their everyday life fairly undisturbed by the visitors. In the old town, which is quite crowded during the day, as soon as the sun goes down and the day trippers leave, the sun becomes a magical land of cobbled streets that glow in orange tones and colorful lanterns. Come to Mostar if you like, but stay for everything else!

Incredible view of the Mostar mosque

The food in Bosnia and Herzegovina has a pretty bad reputation and after my first visit to Cevapi and Rakaia (sausages and schnapps) I had written it off as a foodie destination. When I came back for my second visit, the locals took me under their wing and showed me all the food on offer. I think the call is so wrong.

Meat platters, minced meat, stuffed meat, sliced ​​meat; Meat is a pretty big deal here, and as my vegetarian friend will tell you about our road trip, it isn’t really geared towards a plant-based diet. But beyond the meat, the cakes are and there are whole shops with 100 of them incredible and the locals take coffee and cake seriously. You won’t find many takeaway cafes here, you sit down, enjoy your cake, and people watch as long as possible.

At the Alma coffee in Mostar Old town, where they roast and make their own coffee. I was guided through how right Bosnian coffee is made and this strong liquid served with Turkish Delight is one of the best I have ever tried. The wine from Bosnia and Herzegovina may not be famous internationally, but the red wines are particularly tasty and the prices here are also quite tasty.

Traditional dishes such as lamb cooked under the bell, a ceramic dish dipped in flames and embers, are forgiving and juicy, while fresh fish is an easier option. They also eat donuts, cheese and honey at all times of the day. This is a country I can stand behind.