The following video about the probabilistic version of the suffering was written by William Lane Craig and produced by his co-workers Reasonable faith, The question is whether or not an all-god exists. Do not let Craig, the magician, distract your eyes from this question and you're wrong. For Craig, the magician can not use the existence of an omnigot to solve the problem of suffering the existence of an omnigot, as it is a question of whether or not there is an omnigot. Also he can not use his an undeniable belief in indoctrinated information,

In addition, Christians like Craig are still focusing on the wrong problem. We hear again and again how they (the H. Alvin Plantinga) have answered the logical problem of suffering, and it is evil (and probably false). But if they turn away from the probability version of the suffering, they do not answer the real problem. We're not just talking about suffering here. The real problem is that The extent of the terrible suffering in the world makes the existence of an all-god unlikely. While the video gives lip service to the phrase "so much meaningless suffering," it expresses the following problem: "Suffering provides empirical evidence that God's existence is highly unlikely."

So there are two types of misguided lines. Craig, the Magician, 1) uses an omnigot to solve the question of the existence of an omnigot when so much terrible suffering exists, and he does so 2) with a straw man version of the Real Problem. If you do not see what's going on, do not pay enough attention. Enjoy the show with this magic trick:

One of the most important things to be said is the background knowledge with which Christians can judge the problem of suffering with their superiors, ie their background information (or their knowledge * coughing *).

Here is a selection from one of my chapters in "The Case Against Miracles":

When Christians object, they should stop playing hypocrites by allowing Muslims or Orthodox Jews, Hindus or Satanists to use their own specific background information to determine if Jesus was raised from the dead. I have spoken out in detail for the Outsider Test for Faith to set a standard for how we should think about the other person's wonders. It is a non-duplicate norm based on the Golden Rule: to treat your own miraculous claims as treating others with the same reasonable skepticism from the point of view of an outsider, an unbeliever, the believers already in examining the other religious ones Applying beliefs they refuse. Treat your own indoctrinated faith as you treat the religions that you reject. Only then can one know which religion is true, if there is one. This is the only way to eliminate a whole range of cognitive prejudices that hold the believers in their delusions. So when it comes to background beliefs, background information or plausibility frameworks, the only ones that count are based on objective evidence that we would actually call background knowledge. Many people have misinformed background beliefs that must be subject to the same objective standards as the outrider test for faith.

The strangest argument is turning suffering into a divine evangelistic tool. That is, the conversion is accompanied by suffering. 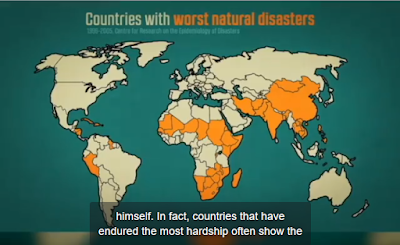 Only four questions here. 1) If suffering causes conversion, why does not Craigs send God any more catastrophes? Hey, why not? 2) If Craig sends these catastrophes, does he shoot himself in the foot, because he provides unbelievers with more evidence against an Omni God? 3) What kind of Christianity do these conversions represent? As far as we know it is different, sometimes in a heretical way. 4) If suffering works so well to convert people, then why not suffer from converting people in the rest of the world? When it needs suffering plus something, it does not just suffer all the evangelistic work. 😉 5) Since Craig is Protestant, why do so many young people leave their faith? Certainly it is partly due to this problem. Evangelical authors are alarmed:

"Over the next few decades, we will see a massive decline in Protestant influence in political, economic, cultural and financial terms," ​​writes John S. Dickerson The Great Evangelical Recession (P. 26). "260,000 evangelical young people are getting away from Christianity every year, 35% of them are finding their way back and 65% are not finding their way back, why are they leaving the country, they do not believe anymore?" (Dickerson, pp. 98-102). "This is not a slip-up, this is a trend, and the trend is towards decline," said Ed Stetzer (quoted in Dickerson, p. SHORTCUT,