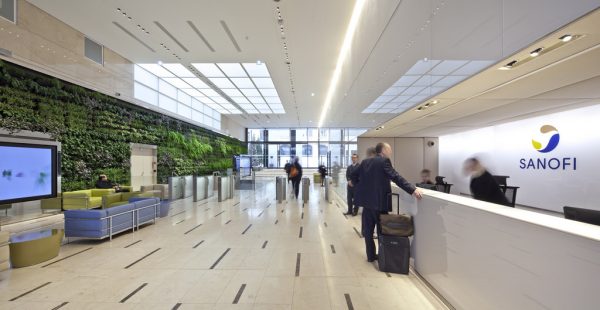 One of the top-selling products from French drug maker Sanofi could face significant competition following the presentation of two phase III studies at a conference on multiple sclerosis drugs that have demonstrated superior efficacy.

On Friday, the Swiss pharmaceutical company Novartis demonstrated Data from Phase III ASCLEPIOS I and II trials of the drug Arzerra (ofatumumab), which demonstrated superior efficacy to Sanofis Aubagio (teriflunomide), at the annual ECTRIMS (European Scores for Treatment and Research in Multiple Sclerosis) conference Stockholm. And on Wednesday, also at ECTRIMS, US-based Johnson & Johnson subsidiary Janssen Pharmaceutical Cos. demonstrated Data from the phase III OPTIMUM study with ponesimod, which also showed better efficacy than Aubagio.

Aubagio is a pyrimidine synthesis inhibitor that has been used to treat relapsing forms of MS with food and drugs since 2012. Sanofi reported In July, sales of the drug in the first half of this year amounted to 903 million euros.

According to the ASCLEPIOS I and II data, which included 1882 patients, the annual relapse rates (ARR) for Arzerra patients were 0.11 and 0.10, compared to 0.22 and 0.25 for Aubagio, respectively 50.5 percent and 58.8 percent respectively. Arzerra is a CD20-targeted monoclonal antibody that has been approved by the Food and Drug Administration since 2009 for the treatment of chronic lymphocytic leukemia. Novartis plans to apply for approval of the drug for MS by the end of this year.

Data from Janssen's study of ponesimod – an S1P1 receptor modulator – showed an ARR of 0.202, compared to 0.290 for Aubagio, which represents an improvement of 30.5 percent. Adverse events included nasopharyngitis, headache, upper respiratory tract infection, and alanine aminotransferase, the general safety profile being considered compatible with drugs in the class of S1P receptor modulators. The company announced that OPTIMUM will form the basis for filing applications by the FDA and the European Medicines Agency.

Arzerra would not only be a potential competitor to Aubagio, but would also compete on three possible fronts with its own competitors. First, there is Roche's Orevus (ocrelizumab), a monoclonal CD20 antibody approved by the FDA approved for MS in 2017, reaching an ARR of 0.155 and 0.156 in its two Phase III studies. Another Roche drug, Rituxan (rituximab), is also being used off-label for MS, and a biosimilar version has already been approved by the FDA.