Life continues to fly at record speed these days. It seems like it was just yesterday December, and now it's March and I have not been writing for nearly 3 months.

Since our last post we visited Egypt (the first time in 14 years) and we had two more InterConnections events. This weekend I'm talking in a panel about Intersectional Feminism.

So Egypt. Why was it so long ago? The last time we were there was 2005 and Kate was just one year old. I think after that, airlines changed a bit and we had to pay the full price for the child seats (or what?) That I can not really remember. Then my sister-in-law visited us a couple of times, and then the uprising … and the massacre of Rabaa.

After my brother-in-law was murdered, Khaled's family told us that we were not sure to go there, even though others in the community had told us. Khaled traveled to his mother and his brother visited him twice when he came to work in the states, but the family insisted that the children and I did not come.

In 2017 they gave the green light for a test visit. Khaled and Mr. Fox stayed for a week and things were alright. When they came back, we talked about going all the next time, and when Khaled's father wanted to see us, we knew it was time.

Visiting Egypt after 14 years was a bit shocking, but mostly I knew what to expect. My girls did not do it though. But they did it well. I think Mr. Fox gave them quick notes about what they would find. It was nice to see the family. I will not share many pictures because I find it super boring to look through somebody else's vacation photos. But I share one … or three. 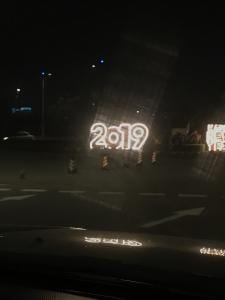 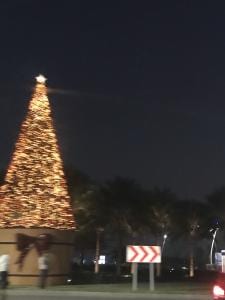 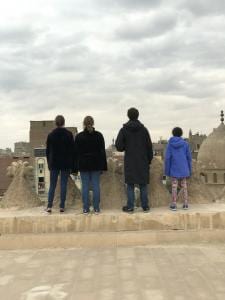 I decided to share the first 2 because I found it surprising and really amusing. Never let anyone tell you that he does not celebrate New Year's Eve in Egypt on December 31 or Christmas. They do. And they are doing great. Granted, they celebrate that Coptic Christmas Date (January 7), they still sell Christmas hats and so on after December 25, but they have trees and candy canes and gingerbread houses and poinsettias. Oh, and as we drove into this roundabout to get a picture of the tree, they played Mariah Carey's "All I Want for Christmas" over outdoor speakers. No joke.

The third picture is my people with my niece. We were at a really old Masjid in Khan al Khalili in ancient Egypt. (I can not remember the name.) She was born here in my town and came home to my house. When she was born, I knew she would be part of my nuclear family forever. I have not tried to skype with her before because it hurt a bit to see her so far away from home. But since I'm with her, I know she's part of it. She and Kate are most similar in facial expressions, physique, and personality. I do not know what the future holds for my sweet girl, but I hope we are never so far away from her again.

In January, InterConnections merged with YWOT and ran one Vision Board event, Then in February. We gathered at the Lava Wellness Spa and talked, relaxed and just spent time together. It's amazing how you can bring 10-15 women together in one room and if you look at the group from the outside, you will not see anything that could bind them. But then you listen to the conversation and learn that they have much more in common than you can imagine. I feel so blessed to have these women in my life.

At some point in late December Nina told me about it Your history, an event during the month of women's history, organized by the Public Library of Toledo, When she said she thought I should do it, I was disappointed. She made her case and convinced me. 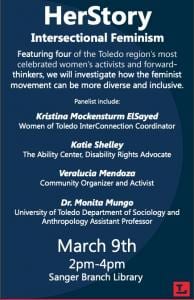 So the event this weekend is about intersectional feminism. I'm scared, but I hope someone in the audience feels less alone when I'm brave and lie down there.