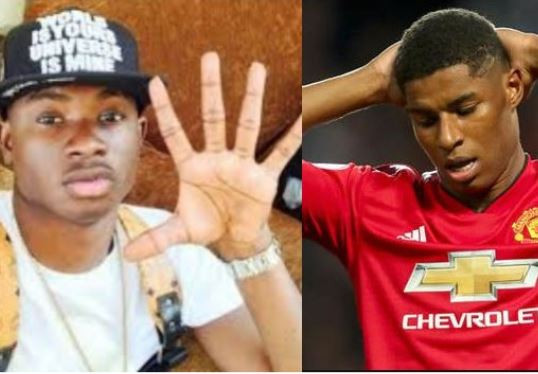 The phrase "Brexit Lil Kesh" is supposed to be demeaning to Marcus Rashford who fans accuse of failing to live up to expectation during last night's match.

"Brexit Lil Kesh" is now the number one trending topic on Nigerian Twitter and the tweets are simply hilarious.

Mbappe dragged Monaco to a league title and champions league semi final, balled for world cup winners and is tearing France just apart from you to compare him to Brexit Lil Kesh. Lmfao behave

Good morning to all fans out there except Manchester United fans. Brexit Lil Kesh who failed to perform at the O – 2 Arena.

But how did they come up with Brexit Lil Kesh ?? pic.twitter.com/PkWNstAMVo

Where the farmers at at? I heard someone call Rashford "Brexit lil Kesh" ?? that just plain wrong ?????

Arsenal, Liverpool, Chelsea, Mancity, Spurs, and which ever team fan. Man U got to L. YOU LOST. You disrespected Mbappe, his family and every sensitive football fan by comparing him to a Brexit Lil Kesh, Rashford. Apologize now !!!!

So it's Rashford y'all are calling Brexit Lil Kesh ?? ??? That's so fogged, y'all need Jesus? pic.twitter.com/Ma5jNIJztz

Yesterday they Turned Some People's Theater of Dreams to Beer Parlor.
Verratti came home from the hospital for a dabbing fraud.
Brexit Lil kesh thought Mbappe what mate because he was scoring brighton?

Calling Rashford Brexit Lil kesh got me like WTF! I swear people are mad on this platform ????

Someone said Rashford is a Brexit Lil 'Kesh. I'm in tears. ??? pic.twitter.com/gfvGqo6l2G

Someone called Rashford Brexit Lil Kesh and I can not breeeeeeathe ???? pic.twitter.com/uQdxhtucG2