Its roots go back to the ancient nomads. Nomads – busy people. Every day, they didn’t bake pies. Therefore, they did this only in special cases. And they put love into the lesson. They made treats from those products that were not difficult to reach in the harsh Caucasian climate – wild herbs, cereals, cheese and meat. The nomadic people didn’t suspect the existence of yeast, therefore the “great-grandfather” of the modern pie was an ordinary flat cake.

Now, as in antiquity, modern Ossetians attach particular importance to the preparation of this dish. The cake is symbolically baked in 2 forms – round and triangular. The circle is considered to be a symbol of the earth, and the triangle implies its integral part – fertility. Thus, eating rosy pies, the locals praise the land, hoping for a bountiful and rich harvest. At festive ceremonies always serve both types of food, imposing them on each other.

Cheese pie has always been considered the king among his fellows, and was especially reverently and dearly loved. And to make it more satisfying, in the cooking process, you can add potatoes to it. Then you alone can feed a large family.

Despite the fact that time does not stand still, the tradition of baking Ossetian pie has not undergone major metamorphosis. If you want to touch the story a little closer, give up the skalok and myalok, cook the cake only with your hands. In order for the dough to come to light, you will need:

It will take you about two and a half hours to cook. The ingredients are designed for three medium sized cakes.

1. First, take a convenient saucepan and sift flour into it. Then pour the yeast in there, put the sugar, salt and pour the milk. Knead the dough from the mixture. Then melt the butter in a water bath and add it to the base. The dough will turn out dense, will stick to hands. Cover it with a lid and leave for an hour. During this time it will grow significantly. And if this does not happen, give him an extra half hour to rehabilitate. While the dough will rest, proceed to the preparation of the filling.

2. Rinse the potatoes thoroughly, peel and boil them. Then push it to puree, do not forget to pre-drain the water. Add butter to it. If you use fresh cheese, then at this stage you need to salt the potatoes. Now let it cool, and in the meantime, rub the cheese on a medium grater. Then mix the two components thoroughly and make 3 balls from the resulting mass. 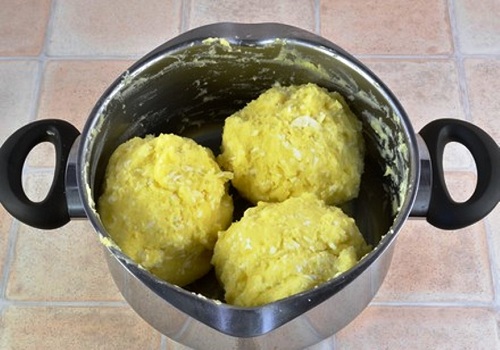 3. While you were doing these manipulations, the dough came up. Feed it with oxygen, flexing it vigorously with circular motions. After divided into three equal parts. Leave two lumps for the time being to lie aside, and spread one piece on a floured board.

4. Knead the dough until it becomes firm. When you feel that the working material is fully grown, roll it into a flat cake with your hands. The most convenient way to do this is on the round board.

5. Then put the stuffing in the middle and wrap it in the dough. Do this on the principle of cooking dumplings. Gently pinch the edges so that the seam is well glued. Then masterfully, like a magician, turn the ball into a cake. Carefully flatten it and stretch it from the center to the edge. Take your time, do everything carefully so that the dough does not break, and the filling does not fall out. 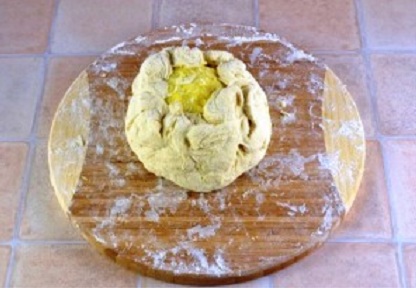 6. Now transfer the cake to a floured baking dish and send it to the oven 200 degrees. Be sure to make a small hole in the middle so that the cake will not rip in the cooking process.

7. Bake for about 40 minutes until a brown crust appears.

8. When the cake becomes an appetizing golden color, reach for it and grease it with butter on both sides.

Applause in your honor! The first is ready! By the same principle, bake the remaining 2 and invite the household to the table! A hearty tasty cake will definitely please them.

If the multicooker lives in the kitchen, then you can safely move away from the usual canons and try to cook the cake in it. The only condition – its power must be at least 860 watts. A bowl, it is desirable to have a pretty deep – at least 5 liters. So, if you are ready for a bold home experiment – proceed. First get the following products.

1. Take a deep bowl and pour warm milk over it. Add sugar and salt to the container and stir. When all the ingredients are dissolved, put the yeast and one and a half cups of flour in the same place. Imagine that you are a shaker and carefully beat everything up with a spoon. When the resulting mass will resemble the dough, put it to stand in a warm place.

2. Meanwhile, melt the butter in a water bath, cool it and pour it into a small bowl. Add kefir, egg and sour cream and mix everything. In appearance you get sour cream. Preheat it in the microwave and add to the workpiece along with the remaining flour.

3. Mix the dough a little more, letting it "breathe" and return "to the mind" back to heat. In total, the dough should be infused for an hour and a half.

4. In the meantime, it is resting, take up the preparation of the filling. It is prepared on the same principle as in the first recipe. Peeled boiled potatoes are mixed with cheese and formed into a ball. If you want to get fresh notes, you can add a little chopped greens to the filling. Parsley, dill, cilantro – choose what you like best. Greenery will give the culinary masterpiece a stunning aroma.

5. Further – on the rehearsed scenario. "Hide" the potato-cheese lump in the rolled dough, pinch it as if you are closing it with a lock. And gently flatten, so that the shape of the workpiece was similar to the cake. It is best to do this wave-like movements, trying to evenly distribute it from the center around the edges. Do not forget to make a small hole in the middle. 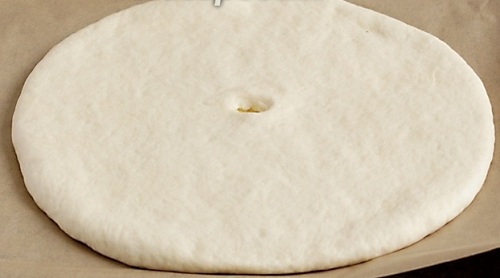 6. Put the cake in the multicooker bowl, choose the "Baking" mode and cook for half an hour.

7. Already traditionally after the allotted time, get out the food and grease abundantly with oil on both sides.

Set the table, invite guests and get ready to receive compliments in honor of the resulting dish!

Best of all Ossetian pies to eat with drinks. The fact is that in themselves they are very nourishing. They have high energy value. Sour cream or sauce will be superfluous. Therefore, simply serve together with pastries fragrant tea, airan, kefir, yogurt, compote or tomato juice. And indulge in gastronomic delight! 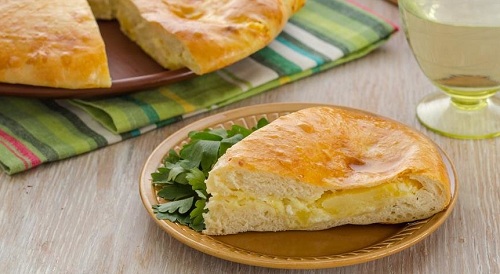 Amazing Reveal > Nigerian > How to cook Ossetian pie with potatoes and cheese ? Recipes