You chose a suitable design of the apartment, thought out the little things and tastefully picked up the furniture, but annoying blunders can spoil your interior. Consider the popular errors in the repair, and your apartment will look perfect. 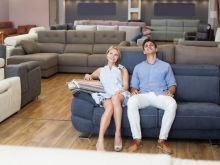 One of the most common mistakes in the repair – wrong glazing of loggias. When builders put plastic panels instead of glasses, for example, to organize a cabinet, they deprive the apartment of sunlight. Think about where else you can store things, but do not sacrifice natural light. The same applies to balcony doors, half closed with plastic panels. Better install fully transparent version.

Another slip in the repair – the wrong flooring. If you put a laminate, remember that the direction of its pattern plays a big role. Ideally, the coating should lie along the window so that the joints are not so noticeable in sunlight. However, in elongated areas, longitudinal planks are undesirable. Then, to balance the long walls and short, you can sacrifice this rule and put the laminate across. Another way to visually affect the size of the room – put the cover diagonally. So you visually enlarge the room.

Pay attention to the joints between the rooms. Replace the coarse iron sill with wood in the color of the coating or with cork. Consider the difference in the thickness of the tile in the kitchen and the parquet in the hallway and try to smooth it out by raising the floor with a compactor.

Make sure that sockets and switches do not overlap with furniture. Ideally, the arrangement of furniture should be planned before the repair work. Then the layout will be optimal. The same goes for floor baseboards. For cabinets that do not have special grooves, and for kitchen sets they are usually not installed.

As standard doors eat up extra space, think about where you can install sliding doors or arrange an opening without them. If the apartment has 2 doors nearby, they should open in different directions, from each other.

Offer from our partner

Popular errors in the repair